For the owners of Wabash Manufacturing the feeling of taking top honours at the GROWTH small business awards gala last weekend can be summed up in one word: “Gratifying.
Jan 24, 2012 12:00 AM By: Town And Country Today Staff 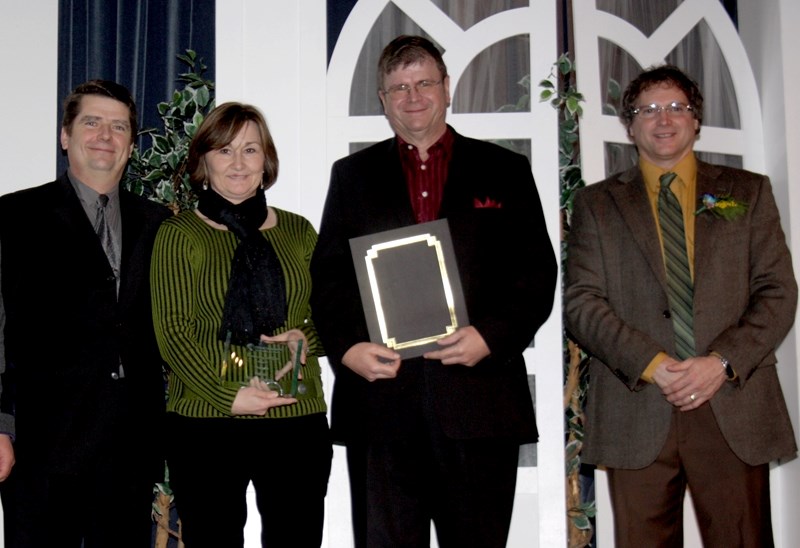 For the owners of Wabash Manufacturing the feeling of taking top honours at the GROWTH small business awards gala last weekend can be summed up in one word: “Gratifying.”

Blaine Harder and Dave Mortensen accepted two special awards for their Westlock-based business at the Saturday evening gala — Business of the Year and the Audience Favourite.

“To be frank, we’ve never considered ourselves a part of the community like a retail business,” Mortensen said, since most of the customers are from out of town and the company doesn’t get much in the way of walk-in clients.

Yet considering Wabash employs about 125 people, making it one of the biggest employers in town, he said it wasn’t too surprising to be recognized. Nonetheless, it came as somewhat of a shock.

“This really, truly is unexpected,” Harder said. “Are we better than any other company in this town? No.”

Marjorie Sterling Miller, who chairs the GROWTH business awards committee, said the awards have been an important part of the GROWTH plan for many years and Saturday’s event was no different.

“I feel that this was another successful one, and we had very different types of businesses this time,” she said.

“I’m amazed at how many manufacturing businesses are in town.”

And while putting on this kind of gala takes a lot of hard work, she said many volunteers helped out the GROWTH staff members to pull everything off without a hitch.

Sterling Miller recognized, however, that given the significant budget cutbacks GROWTH is facing as a result of decreased provincial funding, it will be a challenge to continue to provide the same kind of event next year.

“I’m sure hoping this continues,” she said, noting that businesses in the area have always seemed really appreciative of the recognition that comes with these awards.

Alan Deane, chair of the GROWTH board, said he thinks the awards have become such a significant part of the organization specifically because businesses appreciate having that recognition.

“You think about your local chamber of commerce, and from a local point of view it’s always nice to be recognized by your peers,” he said. “Now on a regional basis, this is recognition right across west-central Alberta.”

Furthermore, it allows these businesses to be promoted outside of the traditional channels, providing the opportunity to connect with new customers.

A business owner in the area might have a connection elsewhere, and mention a company that has won a GROWTH award.

“All of the sudden it gives your business that extra exposure and opportunity,” he said.

From everything Deane has heard from business owners who are recognized, the awards are well received.

“The feedback we get from the award winners is that it has a positive impact on their business,” he said. “It’s been a good thing for them.”

As for what’s next for the awards, Deane said GROWTH has a really good thing going, and referred to the age-old adage of, “If it ain’t broke, don’t fix it.”

“That’s not to say we want to stand still, because everybody knows if you’re standing still you’re going backwards,” he said, giving the example of Wayne Gretzky’s 92-goal season. Nobody went on to suggest he should get 115 the next year.

“I think it’s fair to say that at some point you need to recognize that you may have reached your pinnacle within an initiative.”

Nonetheless, Deane said it would be nice to see something like this all across the province. While there is often recognition give to businesses within specific industries in the province, there is currently no provincial recognition for small businesses.

While there were some winners in the special categories that won extra awards, each of the 12 businesses in contention were also presented with small-business awards.