A life in the forest 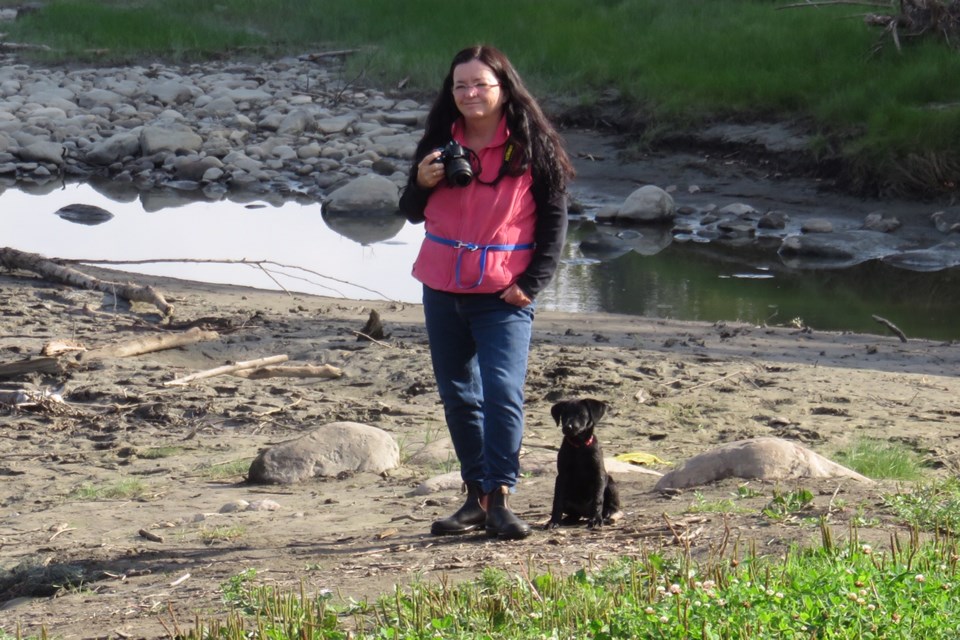 Al-Pac forest ecologist Margaret Donnelly was recognized with a Lifetime Achievement Award from the Forestry Products Association of Canada last week. Donnelly is recently retired and now living in Nova Scotia. She is pictured in a photo from last year where the Tawatinaw River and Athabasca River meet, along with her black lab puppy Jessie. Submitted

BOYLE - As she enters retirement, forest ecologist Margaret Donnelly is not only looking back on decades among the animals and trees, but she’s also looking back on the many passionate people she has worked with and come to know and love over the years.

Donnelly settled down in Boyle about nine years ago after taking a job with Al-Pac, and now after a career-long commitment to sustainable forest management, she has been recognized with a Lifetime Achievement Award from the Forest Products Association of Canada (FPAC). The awards were announced last week as part of National Forest Week.

“I think that what people would say about me and this Lifetime Achievement Award is that I was always so dedicated and passionate … because I felt it really mattered to work towards sustainable forest management, and in particular for the biodiversity of the forest. That was really important,” said Donnelly in a phone interview from her new home in Nova Scotia last week.

“As I told my friends, this was too much. The greatest part of this was meeting people and the network that was developed, and that was the network that nominated me and supported me, so to be recognized by your peers is a great thing.”

There is no long, drawn-out story as to how a self-proclaimed “city chick from Southern Ontario” came to spend much of her career in the forests of Western Canada, it was simply something she was drawn to and wanted to do.

“I think if you ask most people why they work in the forest industry they’ll say they studied the forest because they love to be in it,” “I always make jokes that it was Mutual of Omaha’s Wild Kingdom and Walt Disney that made me do that because I really have no role models in my life that said, ‘Go be in the woods.’”

Since finishing her education in the field, she worked for the Ontario ministry of natural resources for a few years and spent some time with Louisiana-Pacific in Manitoba where she was the lead ecologist behind implementing of the concept of ecosystem-based forest management based on natural disturbances (i.e. wildfires).

Fellow Al-Pac ecologist Elston Dzus remembers meeting Donnelly during that time as both were part of the partners committee of the Sustainable Forest Management Network (SFMN), which was a collaboration of researchers, government, Indigenous peoples and the forest industry to explore the social, ecological and economic aspects of forest ecology and forest management.

“Margaret's skills as collaborator, facilitator, synthesizer and communicator were immediately evident. She was comfortable working with people from all walks of life and loved to share her passion for forest ecology with them,” said Dzus in an e-mail.

After leaving Louisiana-Pacific, Donnelly started her own consulting business, with SFMN as her primary client where she served as Knowledge Exchange Technology Extension (KETE) lead.

“Translating the Greek that academics speak into plain language is a strength that Margaret has in terms of writing and delivering presentations — be they in front of a large audience in a conference room or around a campfire,” said Dzus. “She led that program along with other forest ecology contracts for about 10 years. I sat as an industry partner on the KETE advisory committee and worked directly with her during this time.”

In 2011, while talking on the phone to Donnelly, Dzus mentioned Al-Pac was seeking an ecologist.

“She paused and said she might be interested in it. Thereafter came the resume and interview and we hired her,” he recalled.

One of the unique aspects of working in forest ecology in Alberta, as opposed to other locations in Canada, is the prevalence of the oil and gas industry, and maintaining a balance between its work and the sustainability of the forest.

“What I ended up doing was using my skills and my knowledge to reach out and try to work more closely with the energy sector so we could have an integrated approach to managing the forest,” said Donnelly.

Asked if there was any project or issue that particularly stood out for her in her career, she noted her involvement with caribou conservation.

Donnelly took the lead on many aspects of Al-Pac’s caribou conservation strategy and took on a second position with the company’s integrated land services business unit to collaborate with the energy industry restore old seismic lines that exist in the caribou range.

“I think we’ve done some really cool work in northeastern Alberta, so if you talk about something that I’m proud of and something that has been a really positive development, I would say the integration of thoughts and direction between the energy sector and forestry,” she said.

Donnelly’s new home is a mere 50 metres from the ocean and she enjoys seeing the different birds and the wildlife from her front door. Her passion for the forest hasn’t diminished though, and with a wooded area just outside her back door, it doesn’t have to.

“It’s really cool that I can now just do it for fun.”

Food Banks Alberta Prepares to Support More Albertans this Holiday Season
Oct 25, 2020 10:30 AM
Comments
We welcome your feedback and encourage you to share your thoughts. We ask that you be respectful of others and their points of view, refrain from personal attacks and stay on topic. To learn about our commenting policies and how we moderate, please read our Community Guidelines.