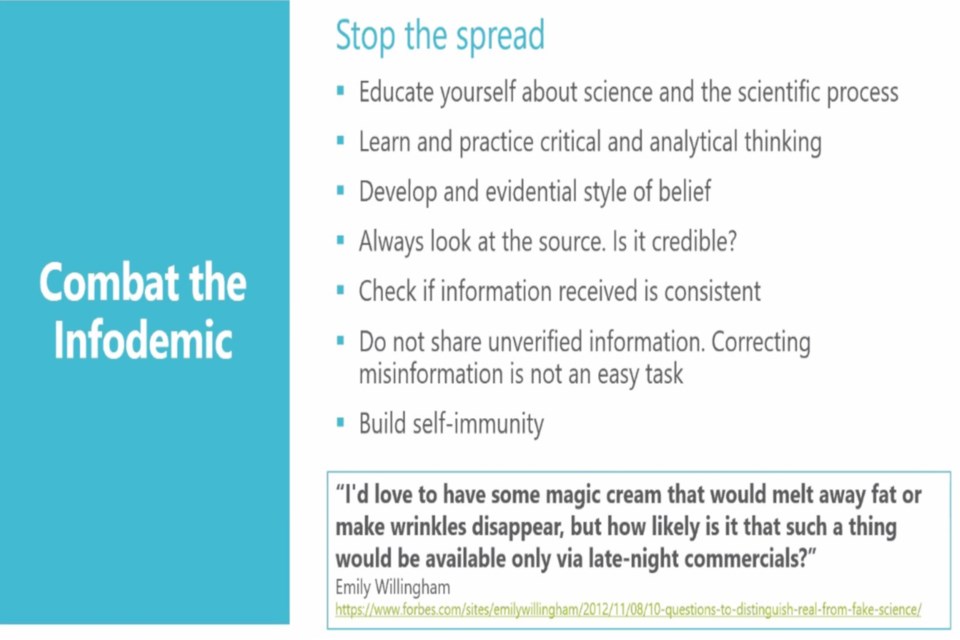 Dr. Farook Al-Shamali, the academic coordinator for physics at Athabasca University (AU), spoke about common myths, conspiracy theories, the risks of falling for fake science, how to combat the "infodemic" and more to almost 60 people who joined in on Zoom.

A lot of people think summer is a result of the Earth's distance from the sun, Al-Shamali said, but that isn't the case. It's actually because of the slight tilt of the Earth on its axis.

“The problem with this theory is that if this is true, then you will see summer will be worldwide. However, the reality of what we know is that when the northern hemisphere is in the summer season, the south in this field is in the winter season.”

He then went on to debunk theories about 5G, microwaves and other false beliefs before defining pseudoscience which he said appeals to people emotionally, but is inconsistent with established scientific knowledge.

“It relies on subjective validation,” he said. “It’s more of a belief actually more than it is an acceptable scientific theory.”

Examples of pseudoscience include astrology, crystals, Bigfoot, and hypnosis, but they stick around because they are profitable and people tend to cling to things that bring them comfort over being true.

“There is no evidence that the position of stars or the motion of stars have any influence for human behaviour,” Al-Shamali said.

Conspiracy theories are born out of people who cannot comprehend the larger picture so they have to break it down into something they can understand, he explained.

“Sometimes these problems are so complicated and for people to solve a very complicated problem — sometimes it's overwhelming — so they think this is an easier way, to tackle or attack or put the blame on someone or a specific issue,” he said.

Using the moon landing as an example, he said it can be beyond people’s comprehension that men could have actually walked on the moon and returned, but the opposite of that would be having to keep tens of thousands of people quiet about faking the landing.

“If you think about it, about 400,000 people were involved to accomplish the moon landing,” said Al-Shamali. “Now, do you think this is feasible to think that a cover up would be possible for 50 years? It doesn't make sense.”

The best way to combat the spread of false science, misinformation and disinformation is to educate yourself. The more people are educated, the less likely they are to fall for conspiracy theories and fake news.

“We have to help stop the spread, so start with yourself,” he said. “Educate yourself about the sciences and scientific processes … and practice critical analytical thinking, it’s very important.”

Science Outreach – AU posts the discussions on their website if you want to check out the presentation.