Getting the best bang for policing bucks

County of Barrhead reeve questions how can they spend their policing money to get maximum impact for residents
Feb 14, 2020 12:30 PM By: Barry Kerton 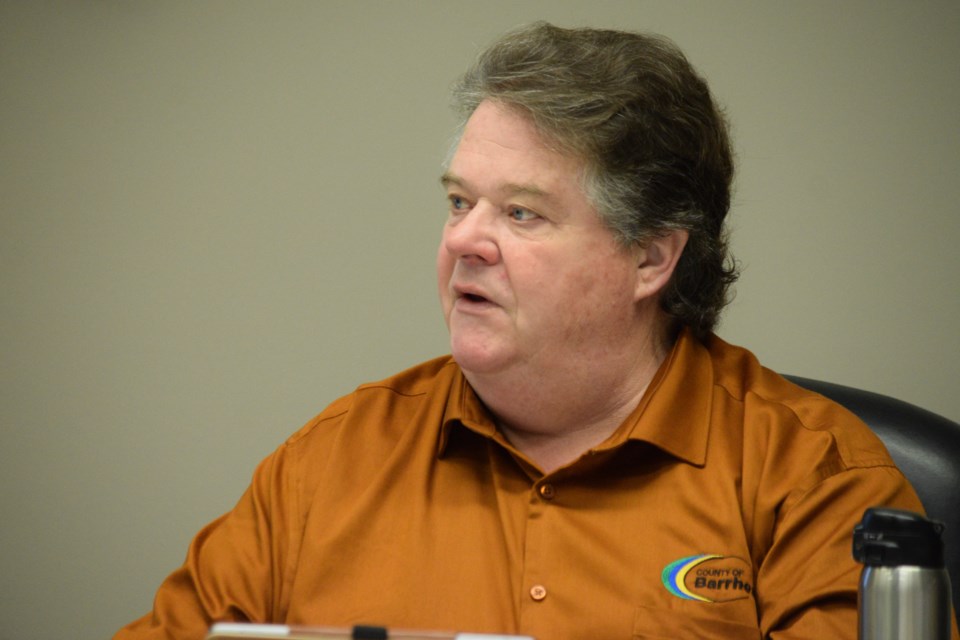 County of Barrhead reeve Doug Drozd asked RCMP Sgt. Bob Dodds if there was an area the municipality could direct potential police funding to that would positively impact public safety. Barry Kerton/BL
BARRHEAD—If the County of Barrhead has to pay for a portion of their policing costs, how can they target it so that it has the most impact for its residents?

That is the question reeve Doug Drozd posed to Barrhead Detachment commander Bob Dodds at the Feb. 4 council meeting.

Dodds was at the meeting to deliver his regular quarterly report.

Starting this year, counties and municipal districts and communities under 5,000 will have to start paying a portion of their policing costs.

In 2020, municipalities will have to contribute 10 per cent. Their share will rise every year until it reaches 30 per cent of policing costs by 2023.

The funds, in part, will be used to add 200 additional civilian support workers and 300 RCMP officers.

However, municipalities can offset this expense by deducting policing services it already pays for such as the school resource officer (SRO) that the county funds in partnership with the Town of Barrhead, Pembina Hills School Division (PHSD) and Woodlands County.

Dodds agreed, saying it makes more sense to deploy certain resources in a community than others.

“A police dog is an awesome resource to have,” he said. However over the 10 years he has been in Barrhead they have used a dog team about 50 times. “That is five days in 365. What do you do with them for the other 355 days?”

Dodds suggested having a crime analyst in the community would create a similar dilemma.

He added that when needed they can utilize a crime analyst based in St. Paul.

Dodds said one area that would benefit the detachment is by funding or providing a civilian member or support staff resource.

“I would love to have 10 more members, but it isn’t realistic,” he said.

That being said, Dodds has discussed the possibility of adding another corporal position with the Eastern Alberta District.

“We are trying to supervise eight constables, with one corporal and given the junior nature of our membership it takes more supervision,” he said. “And that isn’t going to come from municipal funding.”

Currently, the corporal position in Barrhead is vacant as they are waiting for a transfer to arrive.

County manager Debbie Oyarzun noted the discussion about how municipalities can target extra police funding might be moot, as Alberta Justice Minister Doug Schweitzer has stated they will not allow any further policing agreements with municipalities for augmented services until they fill the 300 RCMP positions.

“And [the province] will be the ones who determine where those extra constables go. Dodds added. “I have heard the first round will be 50 constables and the Eastern Alberta District will get eight.”

He added the chances that Barrhead will get one of those constables is slim.

“Barrhead is one of the safer places in the province, so why would the extra resources be sent here?” Dodds asked.

“We are being asked to put dollars in but it isn’t impacting our service level,” she said.

Town picks projects for stimulus grant program
Sep 22, 2020 10:30 AM
Comments
We welcome your feedback and encourage you to share your thoughts. We ask that you be respectful of others and their points of view, refrain from personal attacks and stay on topic. To learn about our commenting policies and how we moderate, please read our Community Guidelines.