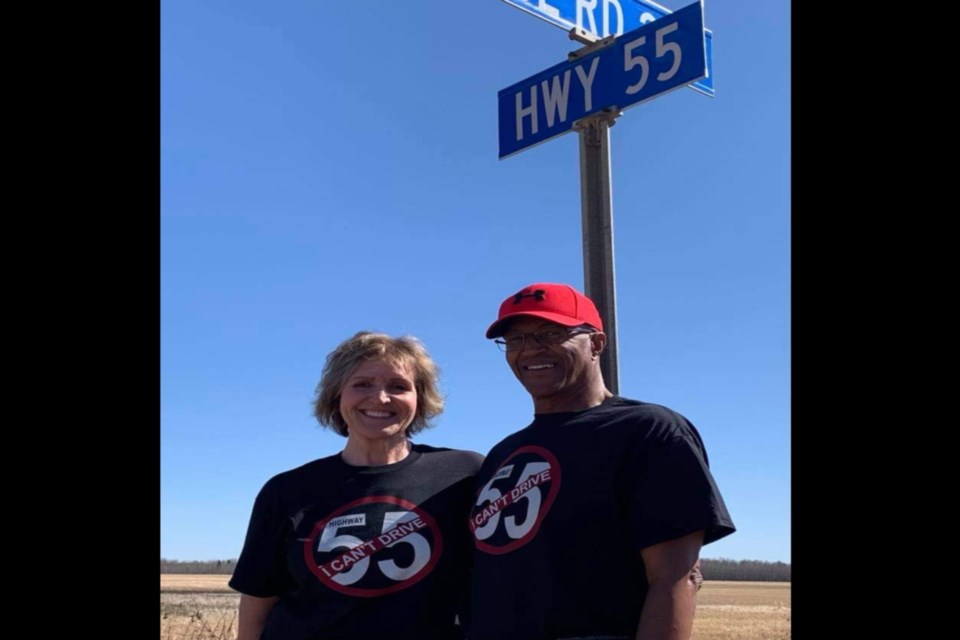 Karyn and Wade Harper stand by the sign for Highway 55 in their ‘I can’t drive Highway 55’ t-shirts. Supporters of the petition snapped up the shirts while preparing to take on the Alberta government in a push to move the highway up the list of work for this year instead of letting it get worse for next year. Submitted/Karyn Harper

ATHABASCA - What started off as a concern for many local residents, has now caught the eye of Alberta's official opposition and NDP Transportation Critic Lorne Dach.

A petition to have work on Highway 55, east of Athabasca, prioritized by the Transportation Ministry gathered 1,900 signatures since March. Athabasca County resident Karyn Harper started  petition, which was then given to Dach to table in the Legislature, but before doing that he asked Transportation Minister Ric McIver about it during Question Period April 19.

“Highway 55 runs 263 kilometres in northern Alberta, connecting Cold Lake, Lac La Biche, Athabasca and the oil sands area. The highway is crumbling, it desperately needed repairs. It’s a major arterial route for locals and industry in the Athabasca region,” said Dach, who is MLA for Edmonton-McClung. “Despite this, the Minister of Transportation told locals that repairs would not happen until 2022. To the Minister of Transportation, can you commit to making repairs on this desperately in-need-of-repair Highway 55 sooner than 2022? Albertans who rely on that route cannot wait another year or more.”

McIver responded saying the highway is on the list for 2022 and in the meantime, repairs will take place.

“It's not unusual, all across the province, Mother Nature provides us with all kinds of surprises in the form of potholes and frost heaves, and we have a program to deal with that every single year instead of this year so the Honorable Member can tell the municipality, we'll be doing that,” he said.

Dach continued to pressure McIver noting the route is vital to the oil and gas industry with countless heavy tankers and semi-trucks on it daily hauling hazardous materials saying a collision involving one of those vehicles would be “catastrophic.”

“I would say to the folks that signed the petition, please take yes for an answer,” McIver said. “The construction will be done next year and this year repairs will be done to keep the roads safe until the work — and that's how we do it — it's a big network. We have $7 billion in the budget including $1.5 billion in the next three years for repairs and we're going to spend it.”

Dach tabled the petition April 21 noting almost 2,000 signatures were gathered during a pandemic and from across the three constituencies Highway 55 runs through — Athabasca-Barrhead-Westlock, Fort McMurray-Lac La Biche, and Bonnyville-Cold Lake-St. Paul.

“The squeaky wheel gets the grease,” Dach said in an April 22 interview. “We certainly have two, if not three UCP constituencies that are served by Highway 55 and there's 1,900 plus signatures to this petition, and many of them are from Athabasca.”

He noted there are just under 8,000 people living in the greater Athabasca region, so approximately 25 per cent signed the petition adding he has reached out to Alberta-Pacific Forest Industries LTD (Al-Pac) for support as well.

“If they think they can get this moved up a year, or at least get it started and get the design work expedited so that as early as possible we can get this work done, then they may wish to join the chorus,” said Dach.

He thanked Harper for her hard work saying it is not only hard to have a petition accepted to be tabled as there are strict guidelines to be followed, but it was done and accepted during the pandemic.

“That's not lost upon me as a politician, and it certainly wasn't lost upon the other government members who realize that there's two rural constituencies, at least, that have got some people very, very upset about a highway that they think is unsafe and is hurting them economically,” he said. “So, if they're smart, they will be responding and saying, ‘Hey let's kick this thing up the priority list.’”

Dach will be travelling the highway himself he said, and meeting with Harper this week.

“I can’t do it alone,” Harper said. “And I hope others will continue to do their part by phoning and e-mailing concerns to our MLA (Glenn van Dijken), (Transportation minister) Ric McIver, and cc: Lorne Dach as he is speaking on our behalf.”