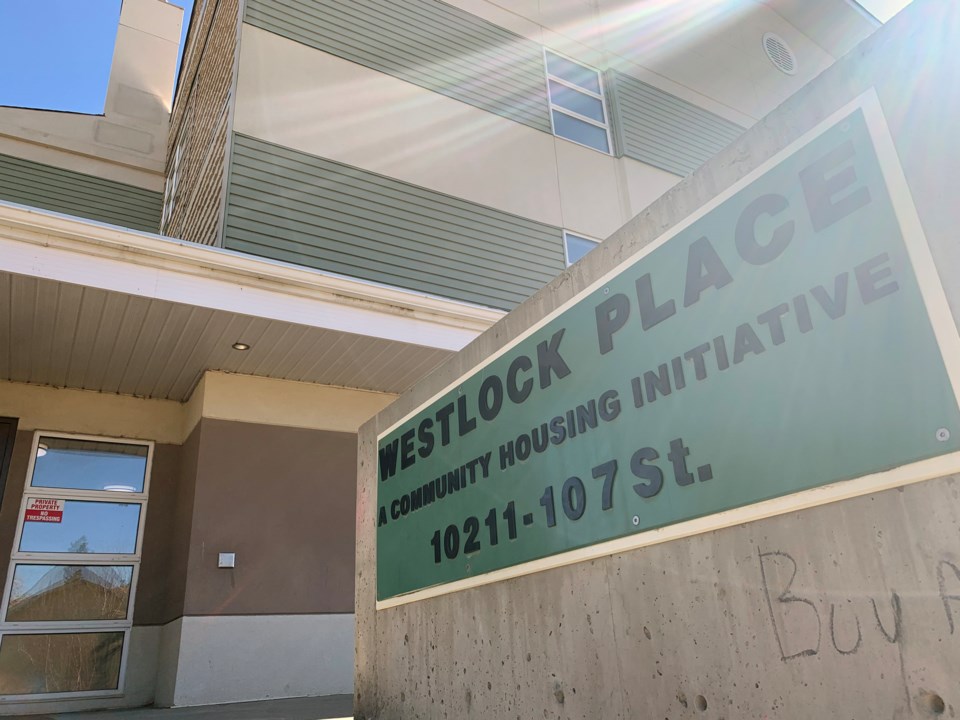 Homeland Housing will be taking over Westlock Place, the town’s 24-suite affordable housing apartment complex. The deal also includes Homeland handing over a $617,080 cheque to the town to pay off the remainder of a debenture (plus a penalty) owed on the facility up to Dec. 31, 2021 — the transfer will be finalized after approval by the provincial government.

WESTLOCK – On Jan. 1, 2022, Westlock Place, the Town of Westlock’s 24-suite affordable housing apartment complex which opened in 2009 and stood out as one of the few municipally-owned and operated in rural Alberta, will become property of Homeland Housing.

Following an in-camera discussion at the July 12 town council meeting, councillors voted 7-0 to transfer ownership of the complex to Homeland, a not-for-profit management body which oversees seniors’ lodges, supportive living and self-contained seniors facilities in Westlock like the Smithfield and Pembina lodges.

The deal also includes Homeland handing over a $617,080 cheque to the town to pay off the remainder of a debenture (plus a penalty) owed on the facility up to Dec. 31, 2021 — the transfer will be finalized after approval by the provincial government.

Both CAO Simone Wiley and mayor Ralph Leriger, who also sits on the Homeland Housing board of directors, said they view this as win-win for the community.

Added Leriger: “This is (Homeland’s) core business. We just felt that the needs of the residents and the community would still be well looked after by this organization. It’s an opportunity for Homeland to add to their portfolio and we still, as a community, have the benefit of the facility and we can now in turn allow our staff to focus on their jobs. But we’re not walking away from it or the residents and I expect the service level to remain top notch.”

Homeland Housing CEO Raymond Cormie agreed, saying Westlock Place fits in perfectly with their mandate and confirmed that it will stay as an affordable housing apartment and eligibility requirements will remain status quo.

Leriger said the successful merger of the Sturgeon and Westlock foundations also played a key role in his advocacy of the deal. Based in Morinville, Homeland Housing formed in 2017 and covers 11 municipalities including the town, county and Village of Clyde and is governed by a board of directors that consists of 13 elected representatives.

“Had it not been for the experience that we’ve had with Homeland on the amalgamation of the Westlock Foundation and the Sturgeon Foundation, I don’t think I would have been pushing for this because I would have been concerned about the transition,” said Leriger.

“It’s a strong board, with really good administration. I get nothing but good comments back from people in the seniors housing facilities and how well-looked after they are.”

Wiley, Leriger and Cormie all gave credit to 2007-2010 town council, then-mayor Bruce Lennon and administration of the day for making the facility a reality.

Westlock Place, which officially opened to tenants Aug. 1, 2009, serves low-to-medium income working families and individuals, persons with special needs and seniors that are below the Core Needs Income Threshold (CNIT).

The $5.1 million building was paid for primarily via $3.87 million in provincial grant money, plus some donations. In October 2009, town council approved a $1.1-million loan to cover the remainder — that 20-year debenture came with a 4.25 per cent interest rate, which added up to a total repayment figure of $1.64 million.

“The Town of Westlock stepped up at a time when the council of the day felt that there needed to be affordable housing here and they did it — they were courageous enough to step outside that core box and get it done,” Wiley added.

Citing numbers from 2019, Wiley said that 46 per cent of the units were occupied by families and of that number 73 per cent were single-parent families. The remainder of the tenants were single, with 62 per cent female and 38 per cent male.

Cormie said that Homeland is paying for Westlock Place from its reserves instead of financing it.

“When we looked at being able to finance the property, because the government does have certain standards as to what rental rates can be charged within that market, it wasn’t cost-effective for us to finance, or to look at debt-servicing the property,” he said.

In addition, Homeland Housing won’t be able to requisition area municipalities for any costs associated with Westlock Place.

“The municipal requisition is only for operational funding for seniors lodges, so in the case of Westlock that would be the Smithfield and Pembina. Something like Westlock Place, or Parkview or any of the apartments, we cannot requisition for those. This decision by Homeland and the transfer (of Westlock Place) will have no impact on our requisition,” Cormie explained.

“And this is very recent, but the province has also mandated that affordable housing has to be self-sufficient, so governments cannot provide operational funds for them.”

Wiley said initial talks started in fall 2020 when she made a presentation to Homeland, but the process ended up dragging on due to COVID-19.

In a previous interview, Wiley noted the town and Homeland had previously discussed Westlock Place during former CAO Dean Krause’s tenure from 2013-2018, but talks then stalled.