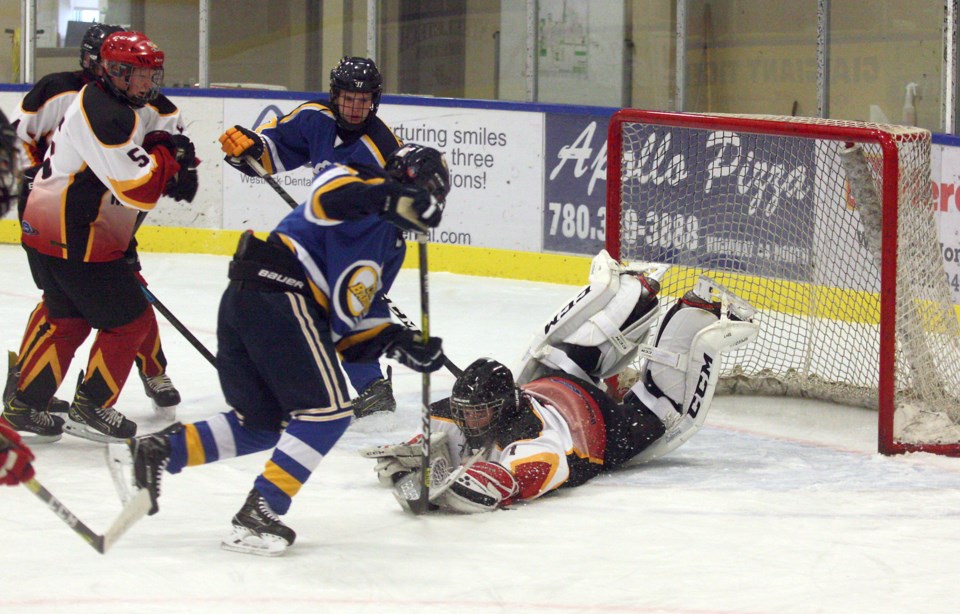 Westlock U15 1 goalie Adam Drake battled to keep this puck out of the net while a Fort McMurray player looked to bounce during a Nov. 8 pre-season clash between the clubs at the Rotary Spirit Centre. Fort McMurray tallied a late third period goal to win the contest 3-2. George Blais/WN
WESTLOCK - Teams across the Westlock Minor Hockey Association played their first regular season games over the weekend, which was a welcomed sight for the association’s executive.

When players first took to the ice in September the prevailing message was that clubs wouldn’t see any real game action until 2021, if it all. Since, Hockey Alberta, with direction from Alberta Health Services, released its return to play guidelines. Following that the Northern Alberta Interlock Hockey League, working with its 43 community hockey associations, have given the green light for league play.

WMHA president Aaron McNelly said he’s received nothing, but positive feedback from coaches and parents. Due to a new 14-day cohort-forming requirement, time trails and skill evaluations, which were conducted by a third-party evaluation company, happened Oct. 20 and Oct. 22 and game evaluations went Oct. 24-25.

“This is good for the kids, I think they need a return to normal,” said McNelly on the long-awaited return to play. “Parents are excited too just to be able to see them play. I haven’t received any negative feedback at all.”

Association vice-president Nelson Jespersen agreed, saying you can see the kids’ faces light up when they’re able to take to the ice.

“For the association our goal is to have kids skating — whether it’s practices or inter-squad games, with the ultimate being league play. The reward as a coach, and even as a member as the board, is to see the smiles on the kids’ faces. That’s why we do it,” said Jespersen, who’s also a coach. “The bottom line is when they hit the ice all their cares go away … they don’t think about all the restrictions and the extra stuff they have to do at school. Even for us as coaches, it’s the same thing. When you put the skates on everything else goes away and it’s just a game.”

On tap for Saturday, Nov. 7, was a U9 tilt between Westlock 2 and Barrhead 3 and a U15 clash between Westlock 1 and Fort McMurray 1, while on Sunday, Nov. 8, the U18 Westlock 2 Warriors squared off against Thorsby 1. Westlock will ice two clubs at the U9, U11, U13, U15 and U18 levels, while there are also two U7 teams whose schedules will be rolled out later.