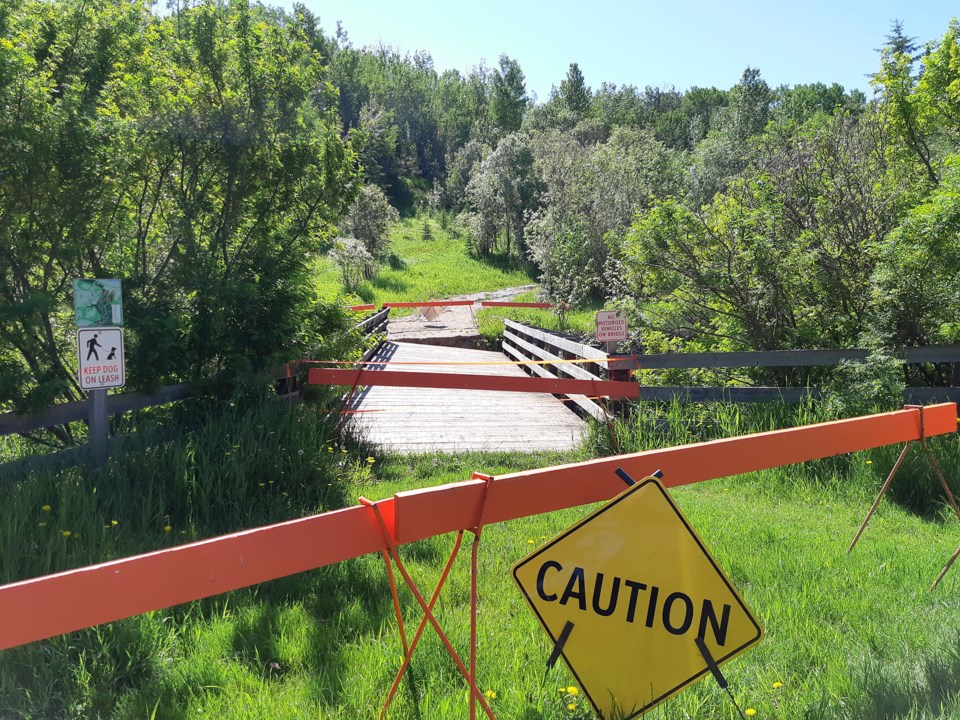 The Town of Athabasca is looking at replacing the bridges on the Muskeg Creek Park trail system to avoid future costs related to repairing them every time heavy rains roll through the region.  Chris Zwick/T&C

ATHABASCA - The bridges that allow hikers easy access to the trail system in Muskeg Creek Park are in need of repair due to recent frequent rains and are officially closed.

Athabasca town council heard the north and south bridges on the trail system were in need of repair from Parks foreman Warren Zyla at their June 16 meeting.

“I went to take a look at the north bridge today (June 16) and the sides are still washing out and the ground is still moving so we still have some time to wait before we can even think about doing anything,” he said.

Zyla said he had spoken with the outfit that installed the bridge over the Tawatinaw River on the Trans Canada Trail and they directed him to a company that rents temporary bridges.

Coun. David Pacholok expressed his concern that the cost of having to repair the same bridges over and over again was going to add up financially. He was willing to explore more expensive replacement options though, as long as constant repairs were not needed.

“These bridges are washing out to a greater degree every year it seems, and they’re projecting that we’re going to be getting more severe types of weather as we go forward and these bridges are not adequate whatsoever,” he said. “This is just going to keep happening, especially if we just keep patching them.”

Coun. John Traynor asked if Zyla had looked into suspension-type bridges that didn’t have to be fixed to the ground and could be installed and uninstalled at will when the creek gets high enough to start eroding the ground around the bridge.

Zyla said that is what they were currently looking at, and the company was already preparing quotes.

“I think we just have to sit down and look at some quotes and come up with a plan as to whether we want permanent, truck-worthy bridges or just the pedestrian-style bridges. There are still a lot of questions we need to answer,” said Zyla.

Mayor Colleen Powell wondered whether all three bridges were necessary.

“I don’t know the answer to that, it’s just a question.”

Zyla responded that a north and south bridge would be required to complete the loop, but the middle bridge, which is actually still functional, is probably not required.

Pacholok joked they could put a pair of rubber boots on each side of the creek.