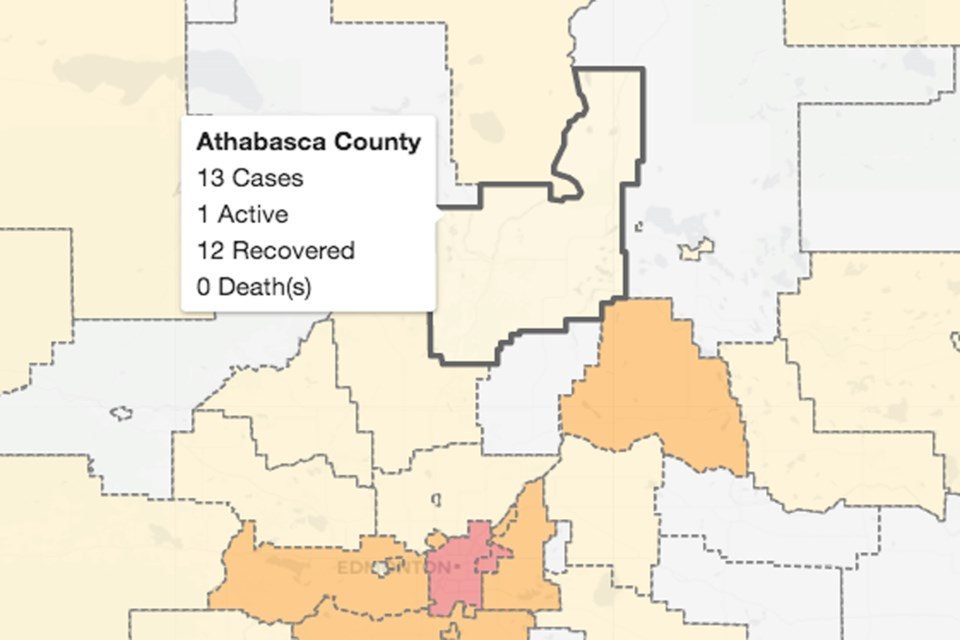 ATHABASCA - Another active case of COVID-19 in Athabasca County was reported Thursday.

An additional case within the county borders was noted on the Government of Alberta's geospatial map Oct. 15 bringing the total number of cases since the start of the pandemic to 13. Another was reported in Westlock County Oct. 16, which brings that area's total number of cases to eight. The County of Barrhead still has four active cases that were reported last week, of the eight that have appeared on the map. Besides the active cases, all others are reported as recovered and there have been no deaths in the Town and Country region.

The exact location of the new case is not known, although the area around the Village of Boyle, which is displayed as its own geographical area in the southeast corner of Athabasca County, is not highlighted.

North of Athabasca County, in the M.D. of Opportunity, there are three active cases, along with 16 others noted as recovered.

Smoky Lake County to the east has 10 active cases, while 46 others have recovered. Lac La Biche County and Thorhild County are clear, but the Hamlet of Lac LaBiche currently lists three active cases and one recovery.

At chief medical officer of health Dr. Deena Hinshaw's Friday press conference, she reported 332 new active cases in the province, bringing the total number in the province since March to 21,775. While the vast majority, 18,651, are reported as recovered, 2,836 are currently active and 288 have died. More than half of the current cases are in the Edmonton region, where Hinshaw recommended new voluntary public health measures last week.

One-hundred-seventeen people are currently hospitalized in Alberta — 11 of them in intensive care.

Request for cemetery mowing moved to budget deliberations
Oct 30, 2020 12:30 PM
Comments
We welcome your feedback and encourage you to share your thoughts. We ask that you be respectful of others and their points of view, refrain from personal attacks and stay on topic. To learn about our commenting policies and how we moderate, please read our Community Guidelines.