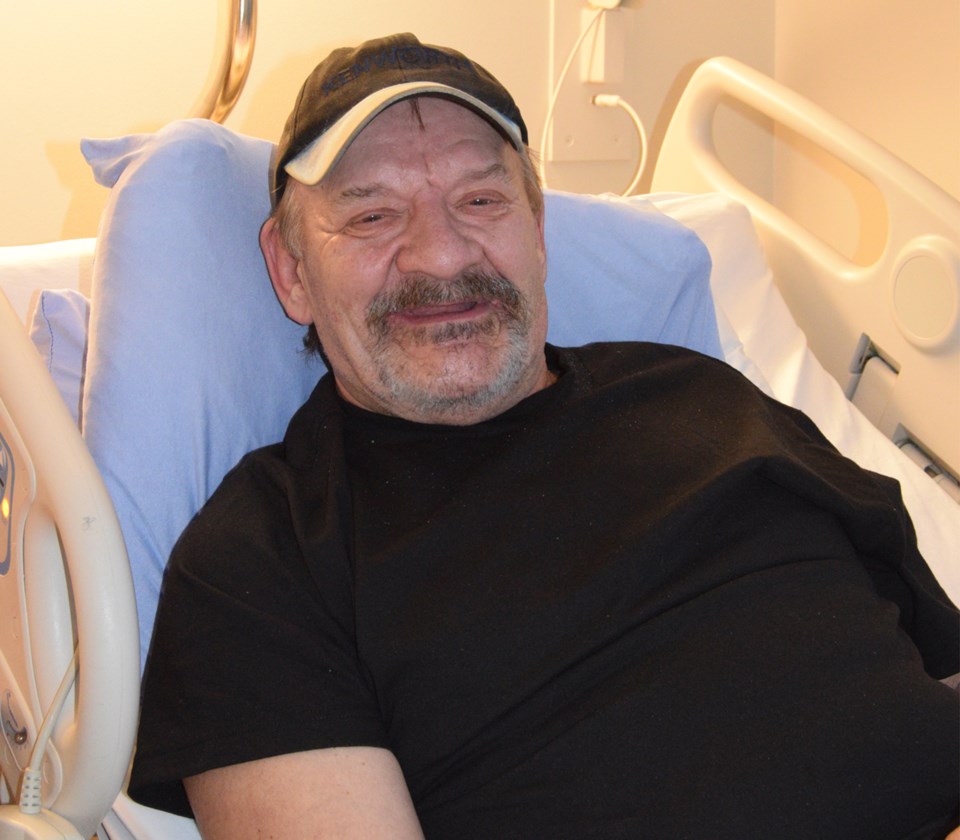 Fort Assiniboine resident recounts his experience of being stranded in his van for the better part four days during an extreme cold snap where temperatures dropped below -40 C. Barry Kerton/BL
BARRHEAD - Derek Lamoriss is lucky to be alive.

And for a period, he was not sure if he was going to live, or if he even wanted to.

That is what the 65-year-old Fort Assiniboine resident told the Barrhead Leader from his hospital room at the Barrhead Healthcare Centre.

His ordeal started Jan. 11 when a relative of a friend called and asked Lamoriss if he would go pick up a motorcycle on an acreage in the Fort Assiniboine/Vega area. He was able to do that without incident.

However, it was on the return trip that he encountered problems. To get home sooner, he decided to take a shortcut and cross the Athabasca River near the Klondyke Ferry. Lamoriss was on the Barrhead/Vega side and was heading back to Fort Assiniboine.

And although the ferry is not in service, he knew that he could drive across the river on an ice bridge, which he did safely.

Unfortunately, when he got to the other side his van, which was equipped with good all-season tires, could not make it up the steep and slick road that met him.

“Now I’m stuck and my [cellphone] has no reception and I didn’t know what to do,” Lamoriss said.

That is when he remembered there was an old shack on the other side of the river that was used by the operators of the ferry.

Lamoriss decided the shack would be warmer than staying in his van so he decided to make the trek to the operator’s shed.

But before he started his trek he wrapped his feet in some of the extra clothes he brought with him, knowing his footwear wouldn’t be up to the task.

He safely made it to the other side, broke the doorknob off with a hammer he brought with him and went inside the shed.

Lamoriss said he left a note apologizing for the damage.

To his surprise and luck, he found a working electric stove. As he was warming himself with the stove, he noticed there were four phones in the shack.

He then called the person he was picking up the bike for and asked them for help. Eventually, a person arrived, picked him up at the shack and using a tow-rope pulled him to the top of the hill.

He then unhooked the van, but before he left, Lamoriss told him he was concerned about getting stuck again.

“I told him if you don’t hear from me in half an hour, it’s best to come back looking for me,” he said.

Lamoriss’ concerns proved to be correct because it did not take too long before he got stuck again, and like the first time, it was in a location without cell coverage.

“I kept trying to get unstuck, but just kept spinning until I run out of gas,” he said.

At this point, it was late Saturday evening.

However, Lamoriss still believed that he was in relatively good shape, and while he was cold, he was sure that help was on the way.

By this time more than a half-hour had passed and given the weather, he was sure the man who pulled him up the hill would send help.

Nor was there any traffic. Except perhaps, for one vehicle Sunday night. Lamoriss tried to get its attention by honking the horn, but to no avail.

By the time Monday rolled around, he had given up hope.

“I remember just wanting to die, I was screaming and crying just asking to die,” he said.

Sometime Tuesday afternoon, Lamoriss woke to hear a snow grader going past. Unfortunately, he did not hear it in time to get its attention, but Lamoriss knew he would have another opportunity when it returned to clear the other side of the road.

It was difficult, because at this point Lamoriss could barely move. Nevertheless, he got into position, opened the door and fell onto the road just before the grader made its second pass.

As for his condition, he is not sure.

“I’m not in pain, I haven’t had to take one painkiller, but they don’t know what is going to happen to my feet and toes,” Lamoriss said.

Although they haven’t said so, he suspects he will lose some toes on one or both of his feet.

He also wanted to thank the grader operator, the hospital’s medical staff, and members of the public.

“Everyone has just been so kind and wonderful,” Lamoriss said.

When he is released, he hopes to go back to Fort Assiniboine, although he will not be able to go back where he was staying.

“My mother and some of my relatives want me to stay with them in Daysland, that’s where I am from, but it wouldn’t be the same. It is so beautiful here, Fort Assiniboine in particular, and I love to fish in the [Athabasca River].”

Editor’s note: Since our interview with Lamoriss he has been transferred to the Royal Alexandria Hospital where he is expected to under go surgery on his feet.