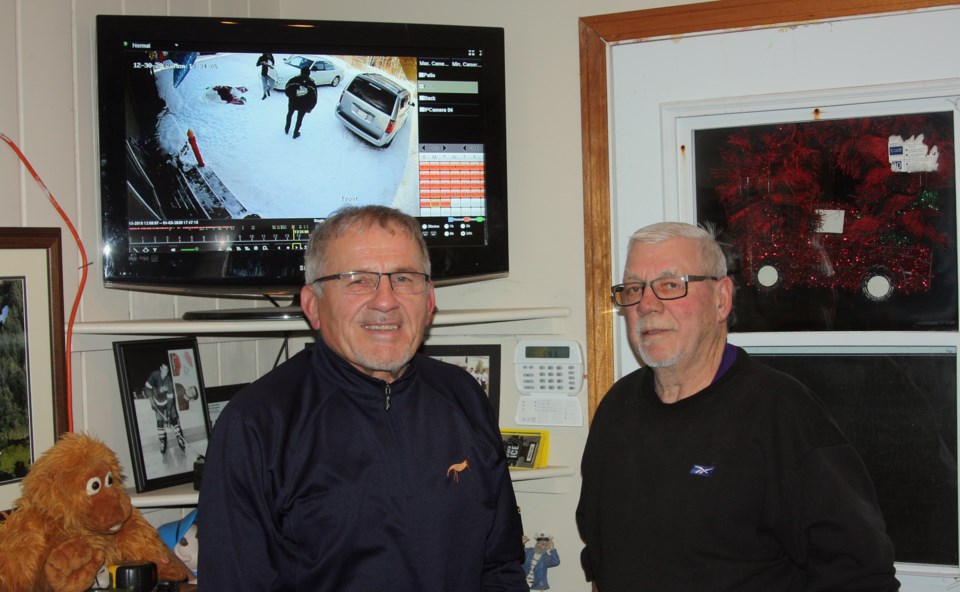 Ray Gagne (left) and Leo Provencal stand in the doorway of Provencal’s Half Moon Lake home Jan. 3, along with the security camera footage that shows the moment Gagne had a sawed-off shotgun pointed at him Dec. 30 by an Edmonton man who now faces 40 Criminal Code charges. Chris Zwick/WN

WESTLOCK - “I shouldn’t have come skating.”

That was the first of a million thoughts rushing through Ray Gagne’s head the afternoon of Dec. 30 as he found himself just inches away from a sawed-off shotgun pointed squarely in his direction by a 27-year-old man, who is now in police custody, and facing 40 Criminal Code charges related to the incident.

It was a late December day, just like any other Gagne had come across in his 74 years. Tomorrow was New Year’s Eve and his 75th birthday — a milestone he had no intention of missing when he got up that day, but very nearly did.

Gagne, a current resident of Legal and lifelong resident of the Vimy area travelled to Half Moon Lake (about 40 kilometres east of Westlock, right on the county line) late in the morning that day to visit with his longtime (70-plus years) friend Leo Provencal, who owns a lakeside lot and lives in the cabin right on the lake.

Provencal builds and maintains an ice rink on the lake’s edge, which is well used by friends and grandkids throughout the winter.

After some time on the ice, Gagne and Provencal unlaced their skates and headed back to the cabin, just a few hundred feet away, leaving Provencal’s granddaughter and her friend alone on the ice.

At exactly the same time, as Provencal’s security camera footage very clearly shows, an individual walks onto Provencal’s property from the other side. He’s dressed in a hoodie and is carrying a blanket in one hand that obviously conceals something underneath.

The video shows him enter a van in the driveway, rummage through it, exit, then check the car beside it. He opens the driver’s door, then goes around to the other side leaving the blanket in the car.

He then approaches the cabin, checks to see if the door is locked (it wasn’t) and enters Provencal’s home and disappears from the video.

Not 20 seconds later, Gagne and Provencal arrive at the door from the other side of the property. Gagne is seen on video going to his van while Provencal enters the home, after noticing the door is slightly ajar.

Seconds later, the subject exits the house, walks, very nonchalantly, passes Gagne, who is at his van, and proceeds down the driveway.

Gagne runs into the house to check on Provencal, who had just walked right by the subject who was hiding behind the door.

The subject then turns around after noticing a garage on the property and goes to check it out. At this point, Gagne is seen running to the end of the driveway, but he could no longer see the subject, so walked back to the house.

In the meantime, the subject comes back into view on the video and returns to the car in the driveway to retrieve his blanket, which he soon reveals covers a sawed-off shotgun, which he then raised and pointed at Gagne, now only a few feet away.

Instinctively, Gagne lurches forward, trying to grab the gun, but he misses.

“All I knew, was that he was killing us. That’s what came into my mind. We’re finished,” recalled Gagne in an interview with the Westlock News at the scene of the crime Jan. 3.

“My mind was so frozen, all I could feel is that I’m going to get shot, whether I give him my keys, I’m going to get shot. He’s shooting me, he’s got a friggin’ gun. So when he came around, I figured I only got one friggin’ chance, I’ve got to grab this gun, but I couldn’t grab it. Then he pointed it at me and I was just waiting for the bang, that’s all.”

Gagne struggled with the subject for a few seconds before he managed to get out of range and behind his van. His thoughts then turned to Provencal, still in the house, and the girls, still on the ice, who would be coming up the path very shortly.

The subject then turns and points the gun at Provencal who was standing in the frame of his doorway, just off camera, watching this all take place.

“I was really shocked that he approached him like that,” said Provencal of his good friend Gagne, who was now relatively safe behind the cover of his van.

Provencal spoke to the subject. He can’t remember the exact words as the whole incident is very much a blur at this point.

“I remember that I told him it wasn’t very good to pull a gun like that. He demanded my keys. I told him it was my granddaughter’s car and said the keys must be inside. I told him politely and nicely ‘Don’t you think you should put your gun away?’ And he did. It was a big relief,” said Provencal.

The subject then covered the gun with the blanket, turned around and proceeded to leave the property, maintaining that he never stole anything. The video shows the whole ordeal lasted all of two-and-a-half minutes. Less than a minute later, the girls appear on screen, returning from their skate on the lake.

Word was beginning to spread by this point and Provencal’s daughter, Kelly Patry, had already left work and was on the road to Half Moon Lake, knowing only that there had been an incident involving her father and he had been robbed at gun point.

“I was on the road because I had got the call, and I didn’t even know if he was OK. The call I got told me my Dad was being robbed and held at gun point,” said Patry.

The subject reportedly approached several more properties in the subdivision, allegedly pointing his gun at residents there as well.

By this point, around 1 p.m., Redwater RCMP were dispatched to the scene in response to a 911 call of a suspicious male trespassing on a rural property. On their way, members received further reports of a shotgun being pointed at residents and called in some back-up.

“While the members were responding to the call for service, additional 911 calls came in that the suspect had now confronted multiple homeowners with a sawed-off shotgun. He was trying to steal a vehicle,” said Redwater RCMP Cpl. Mark Joy Dec. 31.

Additional units were then deployed, Joy said, including members from Westlock and Morinville detachments as well as a helicopter and canine unit from Edmonton.

The suspect was eventually successful in stealing a vehicle, but crashed it soon after and attempted to flee on foot into a thick brush area, said Joy.

“Containment was set up and the police dog and emergency response team tracked and located him and he was arrested.”

Patry said she wasn’t allowed on the property at first as RCMP were still searching for the subject when she arrived, but she met with a couple neighbours down the road who were able to confirm to her that her dad was OK.

It was a restless few hours for Gagne and Provencal and the rest of the subdivision as they were asked to stay inside their homes as police tracked down the subject.

At one point, said Provencal, they saw him cross through his property one more time that afternoon before he was apprehended.

Provencal went on to say he hasn’t had a lot of trouble with crime since he began living there permanently about four years ago. He has owned the property for 17 years, but has only had a few things stolen from him in that time.

Everyone is coming to terms with the fact that crime is no longer an urban-only issue. Gone are the days of leaving your doors unlocked at night, or leaving your keys in your vehicle. It’s no longer possible, said Provencal.

“It happens everywhere, but you would never think it would happen here. You never know,” said Gagne.

They’re able to smile about it now, but both Gagne and Provencal know the experience is something they’ll never forget, and the first few days afterwards were especially difficult. Provencal said he has been feeling under the weather since that day, likely due to stress. Gagne said he had a hard time sleeping, especially on the first night and has been ultra-vigilant, checking his blind spots on a regular basis.

“I see this gun pointing at me every two hours, and I look to see that he’s not there,” said Gagne. “When I attacked him, I just wanted my buddy to get away before he shoots him, because I figured that we were both dead. We were in a bad situation.”

“It was an episode my buddy and I won’t forget for a while,” said Provencal. “We’re just glad that nobody got hurt.”