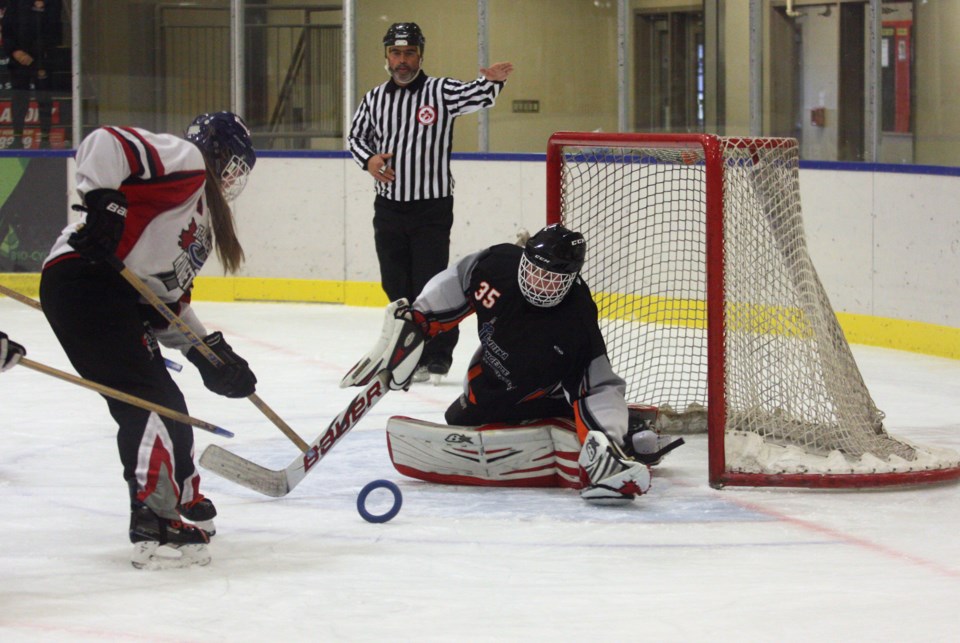 PEM-U16B-1 goalie Ty Pizzey turns aside a shot from a STA-U16B-1 player during the Oct. 17 Black Gold League season opener for both clubs at the Rotary Spirit Centre. Pizzey and her mates went on to score an 8-7 win — the club’s next home game is slated for Oct. 31. George Blais/WN

WESTLOCK - Like most amateur sporting groups, the Pembina Ringette Association has faced its share of challenges due to the COVID-19 pandemic.

But unlike most, association teams actually started playing meaningful games this past weekend — the U12, U14 and U16 clubs all saw action, with the U12s and U16s taking to the Rotary Spirit Centre ice Saturday, Oct. 17 for games against Edmonton and St. Albert.

Association president Janice Tymkow said they’ve managed to ice five clubs from U7 to U16, which is down from seven in the spring as registrations have dropped by about 10 per cent. All things being equal, Tymkow said they’re just happy to be able to have the girls, who hail from communities around the area, back on the ice.

“It’s not as bad as what we thought it could possibly be. I tell parents who have a grim look on the restrictions and how the season will run that it’s a million steps in the right direction. We saw what happened in the spring when kids had provincials taken away. We’ve seen what it’s like to have nothing. The facilities are open, the ice is in and kids can skate. To me this is a step in the right direction and we just have to be patient,” said Tymkow, noting they’re following the COVID-19 guidelines laid out by Ringette Alberta and the Black Gold Ringette League.

“It’s difficult to have to remind parents that sadly we won’t be playing for provincials at the end of the year. But similar to hockey, this is a developmental season. The goal is to have kids on the ice, playing a sport and being active. Facilities, leagues, everybody has been doing a stand-up job.”

Tymkow said that the cohort number, which includes players, team staff and officials, has been set at 50 so they’ll be playing against two other clubs for three weeks.

Following those games there’ll be a two-week break to re-cohort and then it all starts again.

“Normally our season is run in two sessions — there’s a first session, then we re-pool and then there’s a second session. So this year our season will have four sessions and again that’s with the breaks for the re-cohorting,” she explained.

“If we want it to go back to the way it was before I don’t feel that’s unachievable. However, it does mean we have to be patient and cooperative and we need to be mindful of the restrictions that are set in place because if we don’t abide by them, it can easily be taken away.

“Is it ideal? Not to most, but we’re trying to keep the cup half full and keep reminding ourselves of the positives and not dwell on the things we don’t have.”